Pick a random word and do Google image search on it. Check out the eleventh picture it brings up. Write about whatever that image brings to mind. 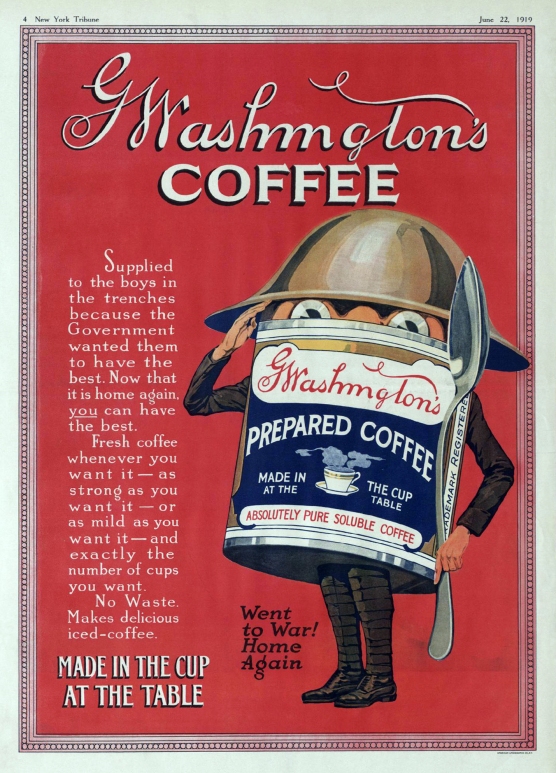 During the Boston Tea Party (1770’s), the Continental Congress declared coffee the national drink.  How coffee ever survived as an acceptable drug has been a source of wonder to me for a very long time.  Anyway, people replaced their tea drinking with coffee as a result of the Tea Party protests against excessive taxation.

Apparently in the 1900’s, a Belgian chemist and inventor named George Constant Louis Washington (possibly very distant relative of the president) came to New York and dabbled with inventing gas mantles and cameras in addition to having three children.  After those businesses failed, he went to Guatemala to try his hand at cattle ranching.  It was here that he noticed flecks of powder on the side of his coffee pot one day.  He began experimenting, and invented instant coffee.  He came back to the US a year later, and began manufacturing instant coffee in New York.  When WWI came along, Washington’s coffee was an important and popular ration for the soldiers, hence they coined the term “Cup of George”.  This is one possible etiology of the term “cup of Joe” (cup of Geo).

In 1943, George sold his company for 1.7 million, and died three years afterwards.  G. Washington Coffee was discontinued in 1961 by Coca Cola (Coca Cola eventually gets their hands on everything).

And now my coffee is cold and needs to be microwaved.  It’s not instant, it’s some sort of Allegro bean stuff from Whole Foods that has been sitting in our freezer for 3 years.

P.S.  What is the current national drink of the US?  Someone on ask.com claims it’s bourbon whiskey.  Have we all been drinking the wrong thing for breakfast?

This site uses Akismet to reduce spam. Learn how your comment data is processed.